There are fewer than 65 spaces total for this incredible handspinning experience! Spend four days expanding your skills and deepening your passion for spinning in one of America’s most beautiful places, the Colorado Chautauqua in Boulder. Learn from some of the greatest spinners and fiber artists in the world, including:

You’ll study with accomplished fiber arts teachers, connect with fellow spinners from around the world, and appreciate the natural beauty and historic surroundings of the Colorado Chautauqua.

All accommodations, breakfasts, lunches, dinners, classes, materials fees, and evening events are included, but space is limited. Tickets start at $2,499.99 for the full retreat.
‍

Sold Out - Join the Waitlist

All COVID-19 CDC guidelines will be followed throughout the event. We will offer full refunds for any reason until August 24, 2021 (30 days prior to the event).

Note: Class details may be updated prior to the event. 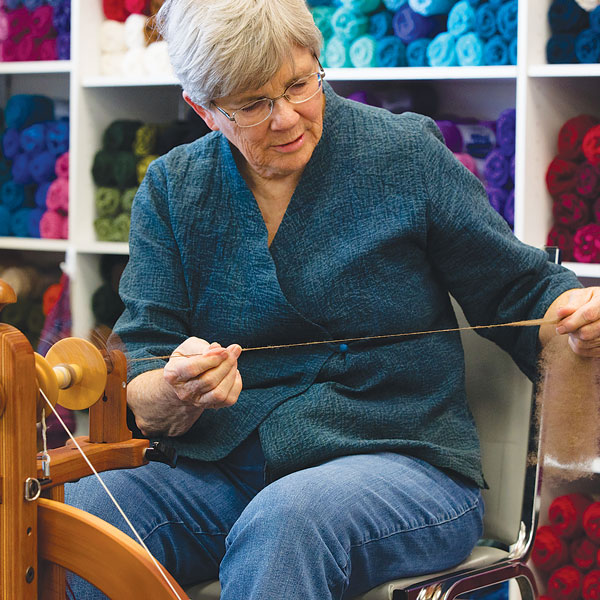 There’s a leap of faith when you draw back your fiber source before the twist enters. Will the loose fibers come together as yarn? Will the inevitable lumps and bumps resolve themselves, even out in plying, or remain as uneven spots? From cashmere for airy Orenburg lace to alpaca for hard-wearing Andean warp, learn to use these versatile drafting methods to spin versatile yarns.

Spinning wheel with all its parts, extra bobbins, and lazy kate.

A spinning wheel or full-size e-spinner is preferred. A Navajo-style spindle will work if you’re proficient with it. 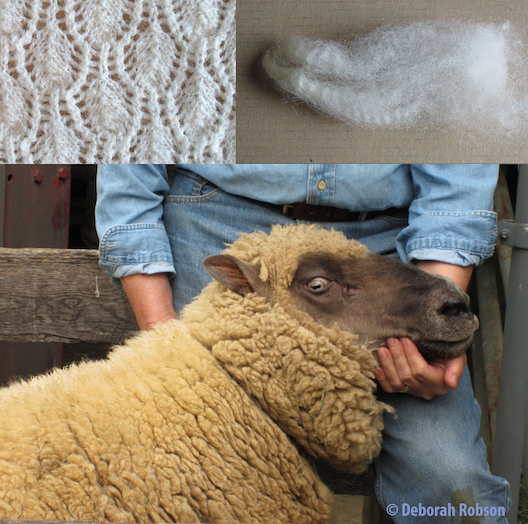 Springy, crimpy Clun Forest wool is “not known well enough for such a versatile, elastic, bouncy wool!” says Deborah Robson in The Fleece & Fiber Sourcebook. In this class, spinners will fix that, exploring washed locks from this threatened heritage breed. Sourced from nearby Niwot, Colorado, the fiber will be enough to qualify for a sticker in your Shave ’Em to Save ’Em Passport.

Spinning wheel with extra bobbins and all its parts

A mid-weight spindle (or assortment of spindles) will work for most of the techniques in class, though a spinning wheel or e-spinner will be needed for a few 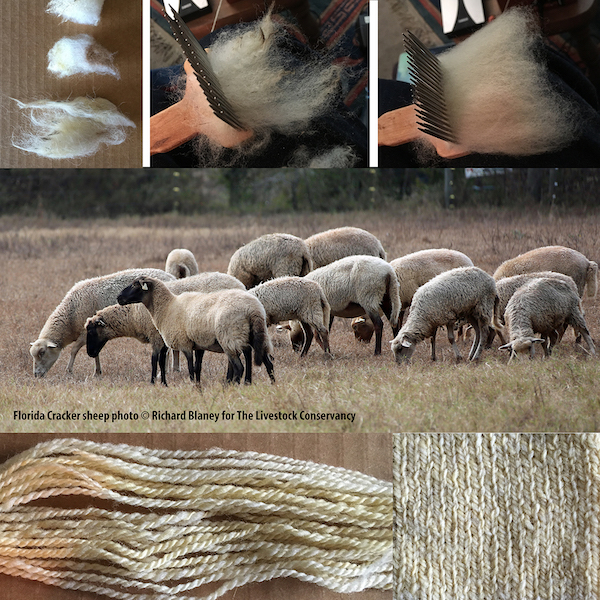 Have you been wanting to try some Florida Cracker? The newest addition to The Livestock Conservancy’s sheep list, it has the highest conservation priority of the breeds in the Shave ’Em to Save ’Em Initiative. Spinners will explore and spin washed locks of this unusual breed, which Deborah Robson calls “a fun wool, finer and slicker than Clun Forest.” Participating in Shave ’Em to Save ’Em? You’ll receive a qualifying quantity of the fiber (and a sticker for your Passport).

Spinning wheel with extra bobbins and all its parts.

A mid-weight spindle (or assortment of spindles) will work for most of the techniques in class, though a spinning wheel or e-spinner will be needed for a few. 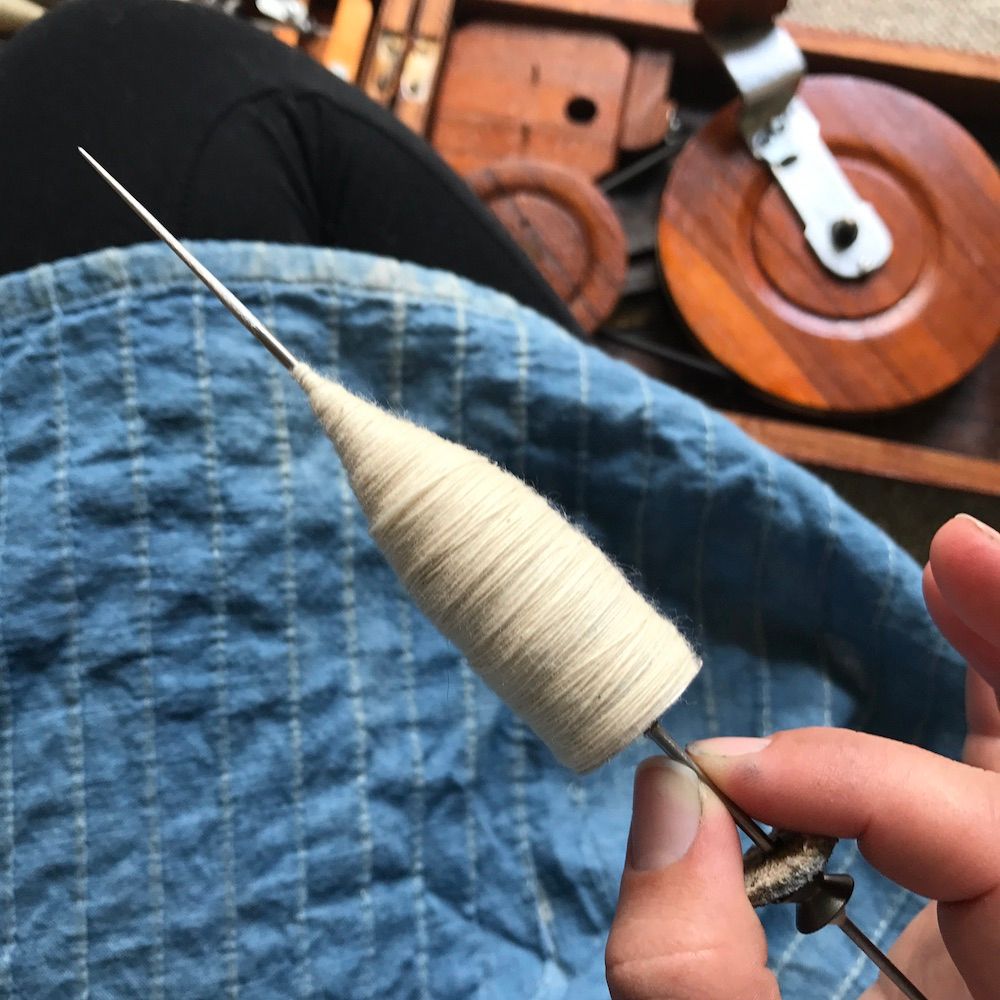 Book- and briefcase-style charkhas—largely used for spinning cotton singles—are captivating, self-contained little devices. However, the learning curve can feel steep. Learn tips and tricks to begin a charkha practice: exploring multiple types and preparations of cotton to find your best fit, understanding adjustments and lubrication, seated positions and ergonomics, troubleshooting, yarn handling, the beauty of corn-husk bearings, and more. Learn to listen to your charkha, tune it like an instrument, and adjust your movements to spin in harmony.

If you have a book or box charkha, feel free to bring it 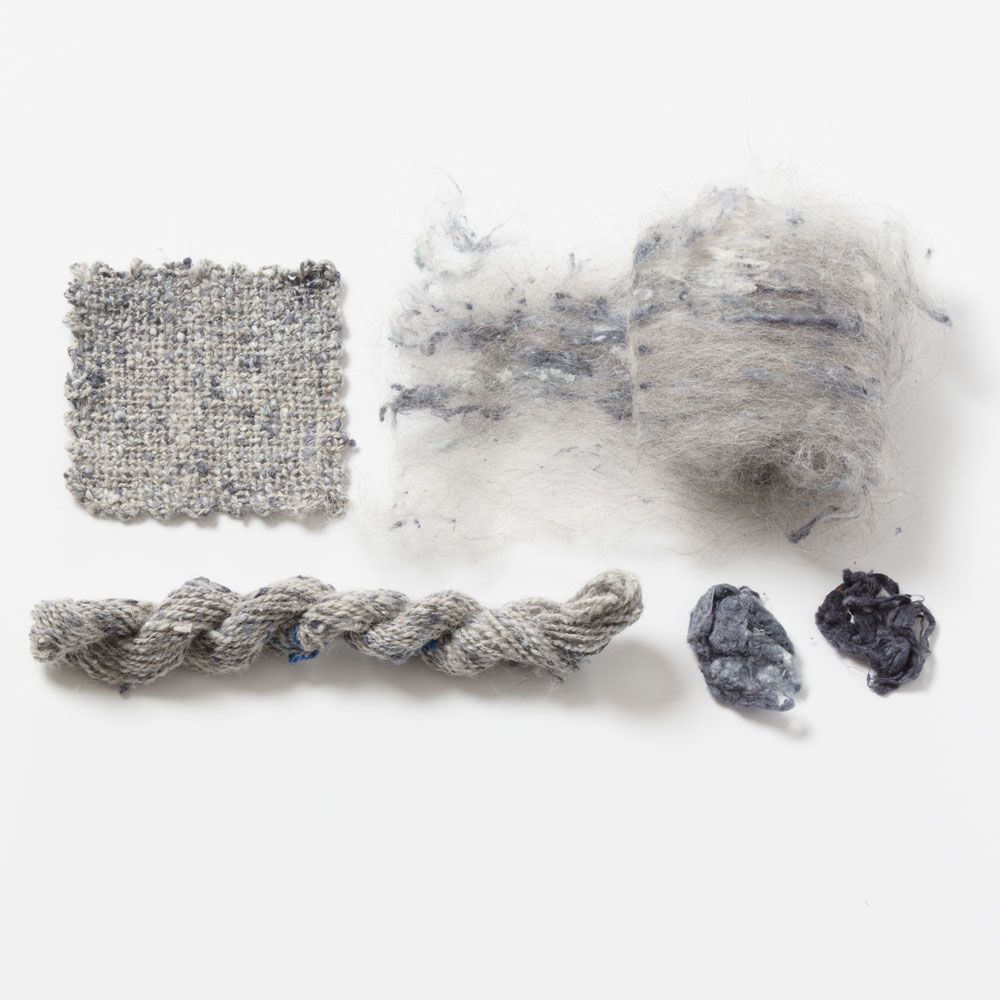 Do you want a yarn that is textured but still subtle? Have ends, little scraps of yarn, no matter the fiber, too precious to throw away? Want the perfect yarn for making that classic walking coat for the rainy moors of Scotland?  Tweed is the yarn that can make these all happen. Learn to spin yarns that embrace flecks, neps, and even felted wool and recycled yarn.

Working spinning wheel and all of its parts, even the ones you’ve never used, with extra bobbins and lazy Kate.

Knitting needles in a range that you like to knit with.

Handcards—there will be some available to borrow, but we’ll use them a lot! 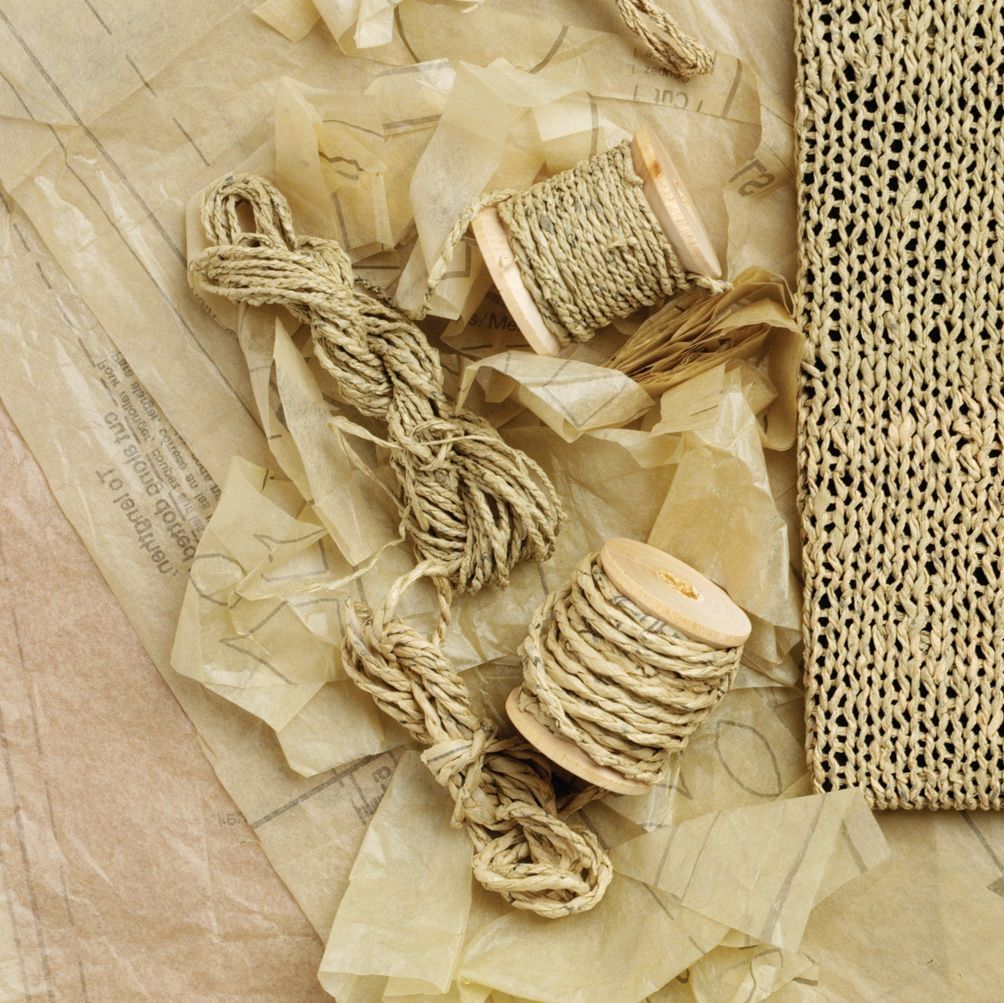 The Art of Spinning Paper

If you’re fascinated by shifu and washi paper or just looking for a new cellulose fiber, try spinning paper, an old and honorable art that’s also fun and easy to do. It makes beautiful, washable and oh-so-wearable yarn. In this workshop, we’ll spin several different types of paper, including mulberry, recycled, and handmade. We’ll learn how to spin a variety of diameters, produce different surfaces and textures, and look at interesting ways to use these wonderful and unusual yarns.

Spinning wheel and two extra bobbins; if you have a choice, bring the larger pulleys for your flyer. Lazy kate. Scissors.

Any type of paper that interests you—we’ll check its spinning potential. 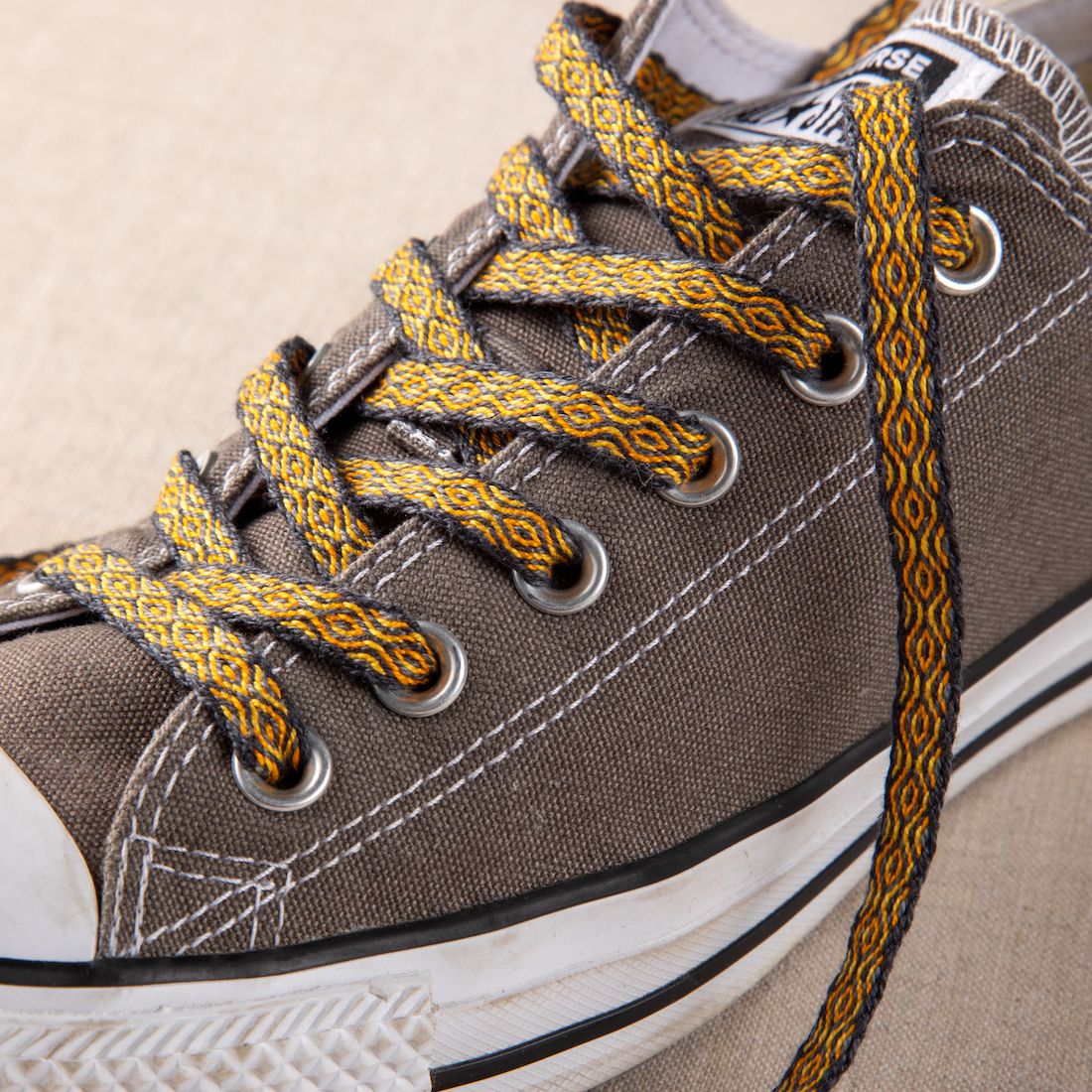 Weave your own shoelaces!  Tablet weaving uses a set of simple cards as a loom to create ribbons or bands that rely on twist direction to create intricate designs. Besides being beautiful and fun to weave, these are superstrong laces that may very well last longer than your shoes. And your shoes will thank you for taking the time to make them look even better. 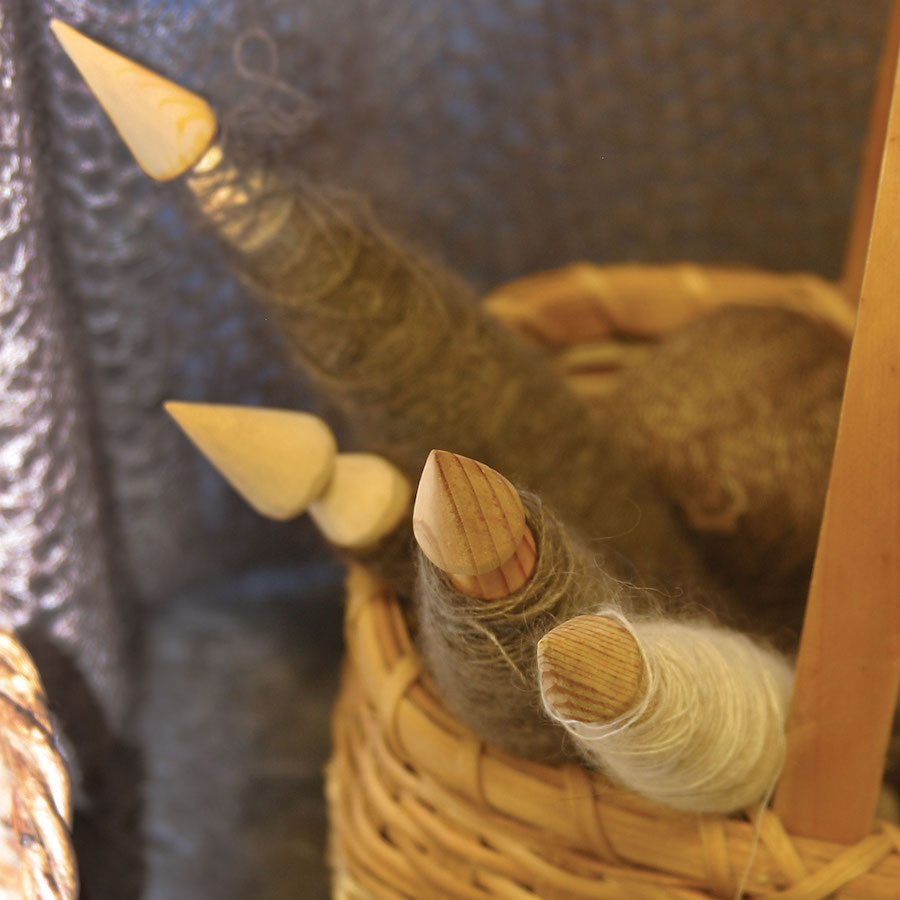 Supported Spinning in the Orenburg Way

To spin the fine, ultrasoft fibers used to make Orenburg lace yarn, spinners use a one-piece wooden Russian spindle. No whorl, no hook—just a simple, straight spindle supported in a bowl. Learn to spin incredible yarns from short luxury fibers—and even discover how some spinners use their spindles in a suspended mode.

Russian spindle or other supported spindle. 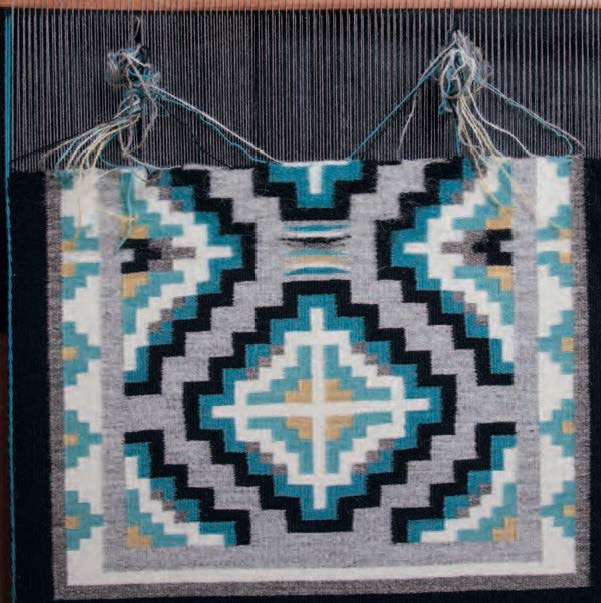 Two Navajo holy people, Spider Woman and Spider Man, gave weaving to the Navajo. Spider Man constructed the first loom, composed of sunshine, lightning, and rain, and Spider Woman taught the people how to weave on it. As Lynda teaches and demonstrates the art of traditional Navajo weaving, she will also teach about Navajo history, culture, and the weaving legacy of her family. Students will begin with a fully warped upright loom and learn to weave and design in the traditional way.

A pillow or support if needed to sit comfortably; your preferred task lighting. 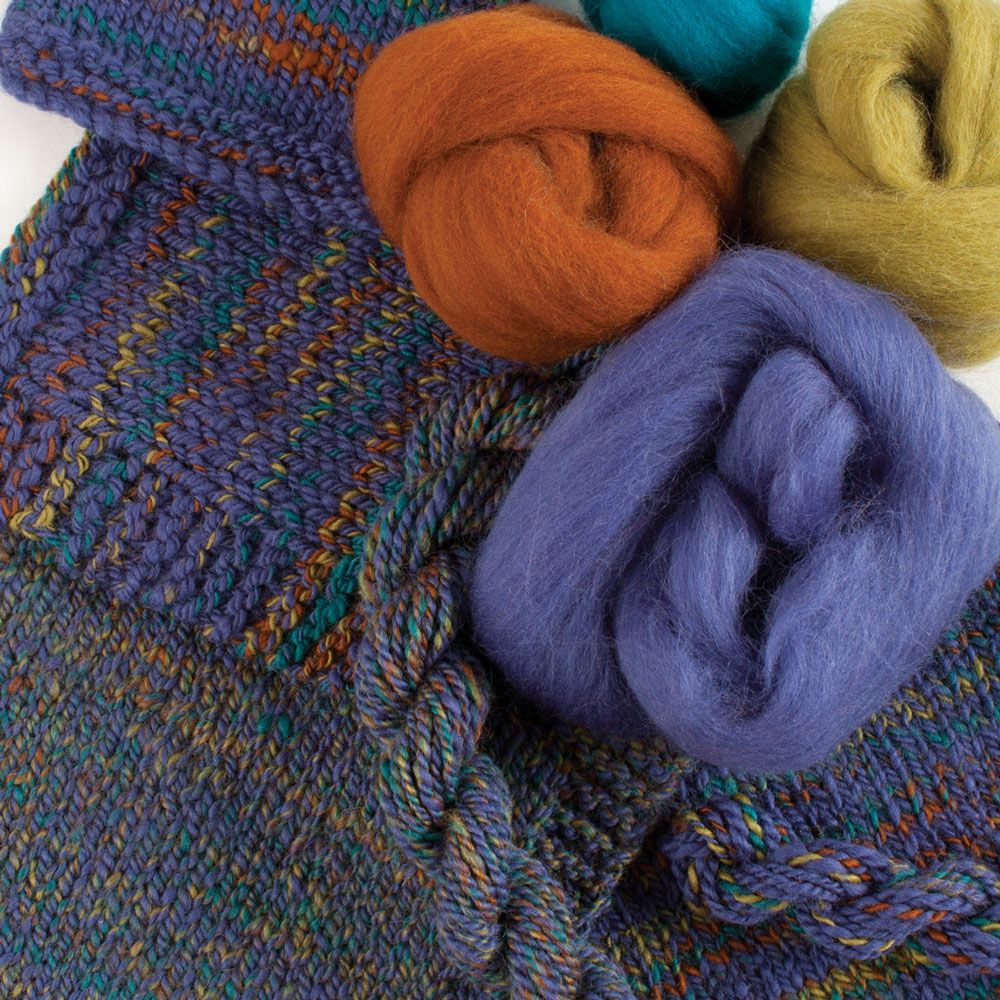 A Spinner’s Palette (no dyepot required)

Just as artists mix paints to get the colors they want, spinners can do the same with dyed fiber and handpainted braids. You’ll blend dyed roving to make a color wheel and play with color theory, then design and spin yarns that can be quietly heathered, brightly marled, or tweedy. You can design your own “braid” or spin a gradient with smooth transitions. Next, you’ll look at how different braids are dyed, spinning a braid to see how many looks you can get. Get all the fun of playing with color, without the dyepot.

Spinning wheel and all its parts in good working condition. 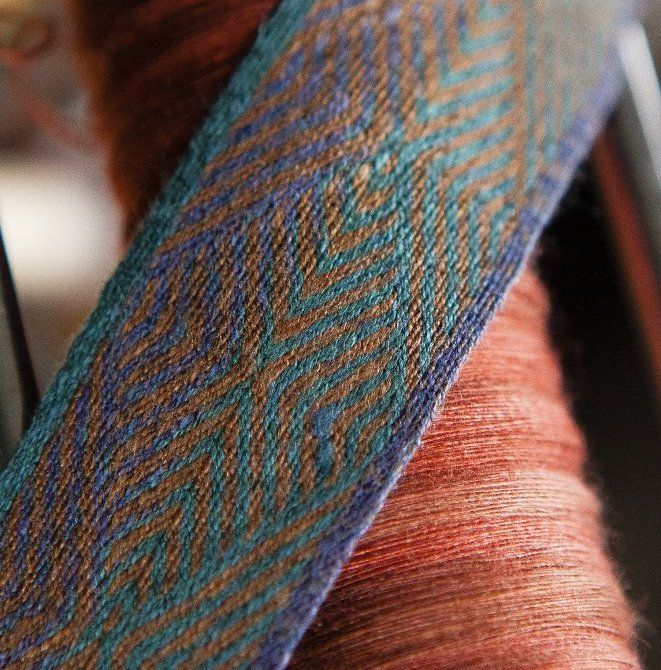 Learn to spin beautiful strong silk yarn suitable for tablet weaving—and learn the basics of tablet weaving, too. This two-day workshop will teach you the secrets of spinning the most glorious fiber created by worm. You’ll create a tablet-woven sample using cotton yarns, giving you the skills to make beautiful silk ribbons with simple tools.

Spinning wheel and all its parts, extra bobbins, and lazy kate. Scissors 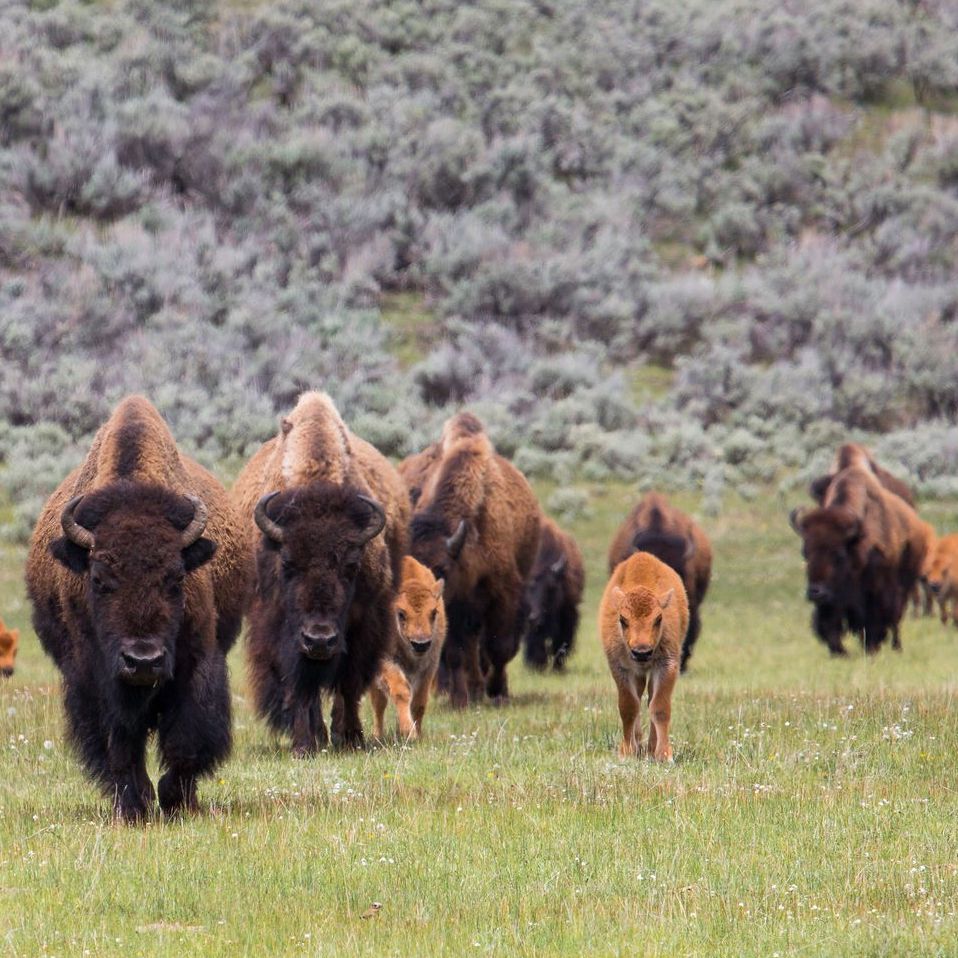 Woolies from the American West

When you think about the “Wild West” of North America, you may picture horses, cowboys, and great rolling grasslands full of long-horned cattle. But when Judith moved to Montana, she found an amazing range of fibers. Many, like sweet grass, had been used for thousands of years. New ones, like bison down and locally produced cashmere, were still exciting experiments. Exquisitely fine wooled sheep were abundant, and new sheep breeds including the Columbia were developed here. In this class, we’ll have a look at fibers that were used precontact and some of the fibers such as Columbia, Montana cashmere, and bison that have become available recently.

Spinning wheel and all of its parts (even the ones you’ve never used), extra bobbins, and lazy kate. 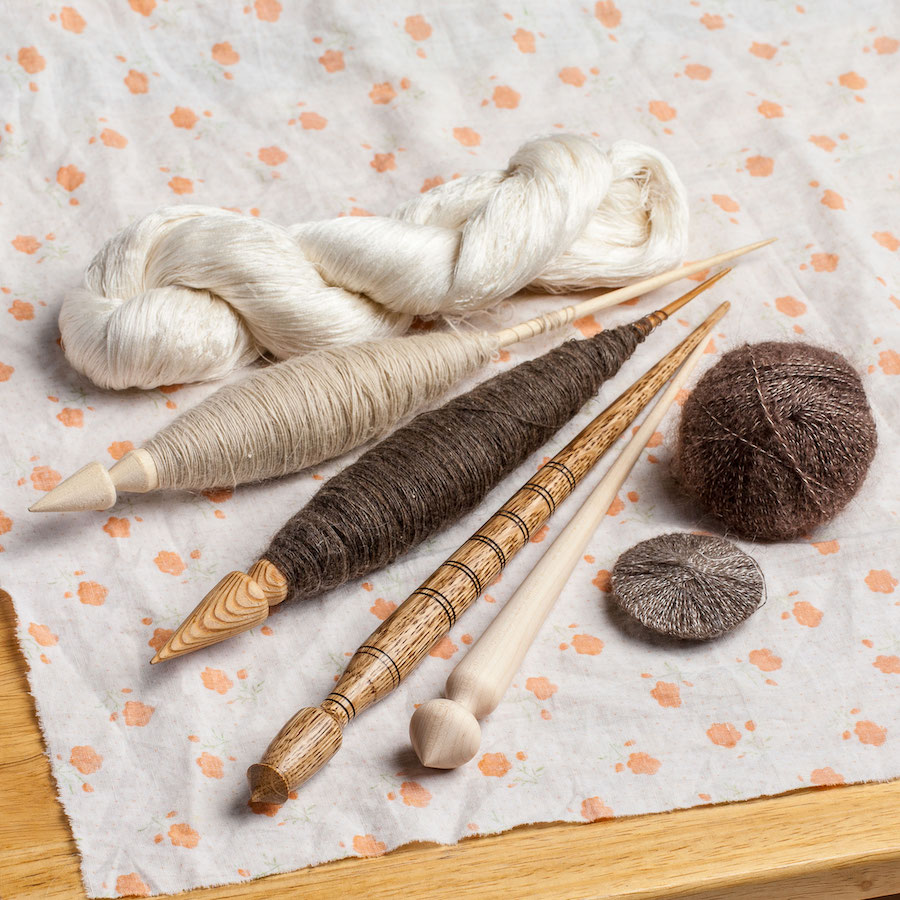 From the downy undercoats of cashmere-type goats to warm, glistening yarn, spinners of Orenburg yarns prepare, spin, and ply in unique ways. Learn how fiber is prepared with a traditional hackle, spin cashmere on a supported Russian spindle, and discover how to wind very fine silk thread and handspun singles onto a spindle before plying.

Visit Eugene Textile Center's retail shop for equipment and materials for the fiber arts, as well as studios for weaving and surface design. They offer classes and studio support for anyone with an interest in handweaving, surface design on cloth, and other non-woven fiber techniques. 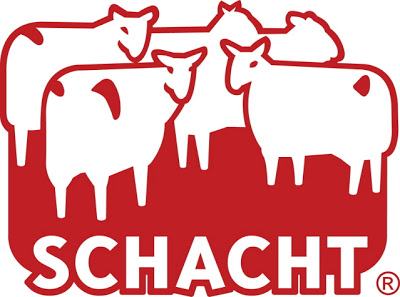 We have been designing handweaving and handspinning equipment since 1969. It's been pleasurable and challenging to learn how closely our products tie in with the craftsperson's work. We realize that the quality of this work depends on the quality of our tools.

Long Thread Media serves content for the handspinning, handweaving, and traditional needlework communities online, in person, and in print. The company was founded by Linda Ligon, Anne Merrow, and John Bolton to publish Handwoven, PieceWork, and Spin Off, as well as offer information, education, and community to crafters in those fields.

Can I take just one class?
Because SOAR 2021 is an immersive experience with activities outside class time, classes are currently available only as part of a 4-day package.

‍  What’s the difference between the first and second halves?
On Friday and Saturday, participants will sample four subjects in 3-hour sessions. These classes emphasize trying new techniques, exploring unusual materials, and sparking your creativity. On Sunday and Monday, each student will participate in a 2-day intensive designed to explore a subject in greater depth.

‍ I’d like to come for the market.
Colorado Chautauqua has limited facilities, and we regret that there isn’t a suitable space for a marketplace.

‍ Are there materials fees?
We have included the cost of basic materials in the fees. In some cases, instructors may allow you to purchase some specialized tools used in the class.

‍Where will classes be held?
The classes will all be held in Chautauqua facilities.
‍
‍How do I find a roommate?
Chautauqua includes a variety of lodging, mainly in stand-alone cottages. When you register, please choose the level of room sharing you want, and indicate in the notes whether you have a roommate/housemate in mind or you would like us to introduce you to other guests seeking roommates.

I’m gluten free/dairy free/have specific food preference. Can you accommodate me?
If you write to us with your dietary restrictions, we’ll check with the kitchen and get back to you with alternatives they can offer. Please email us at support@longthreadmedia.com with any restrictions before August 15.

Is the event handicapped-accessible?
Being a historic landmark situated, Colorado Chautauqua is not ADA-compliant, and it is located at 5,000 feet in elevation. Please contact us directly about your needs and whether an accommodation is possible.

Can my spouse/companion attend?
Due to space limitations, no spouses/companions can attend the event meals or activities, and  spouses/companions need to be pre-approved by Long Thread Media in advance of the event. Attendees who have a guest joining them should choose private/private ticket type. You will be provided with a cottage with a queen bed. (There are no private/private rooms with king beds.)

SOAR is brought to you by Long Thread Media LLC.